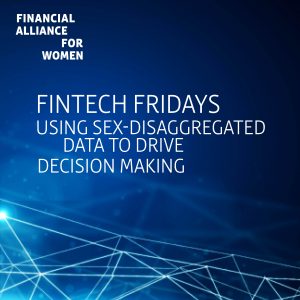 Alliance research in 2020 into “How Fintechs can profit from the multi-trillion-dollar female economy” found that on nearly 80 percent of fintechs are equipped to disaggregate and analyze their data by sex—yet few of them do. Those few tend to have been either started to focus on specific market gap by targeting women or have pivoted toward the women’s market when they start looking at usage and other customer data.

The latest #FintechFriday expert panel focused on how sex-disaggregated data is being used to drive decision in their companies. Among their many insights, one takeaway was to be cautious about making decisions based on the initial numbers you see, particularly in market segments where men are more likely to be early adopters of new technologies. We heard from Dietmar Bohmer, Head of Data Science at Tyme, South Africa’s first fully-digital bank, that while initial uptake skewed male, over time it is skewing female. Dietmar mentioned design features such as locating Tyme’s kiosks in retail stores where women shop regularly and having personnel onsite at the kiosks to assist customers with opening accounts. In terms of data, he advised that usage and other metrics be compared to the initial market research and followed up with mystery shopping so that data can be interpreted within the specific context.

Another takeaway was that as fintechs expand their data analyses to include disaggregating by sex, they become aware of news ways women customers bring value and to incentivize strong behaviors. Mohammed Ridzuan Abdul Aziz, Head of ASEAN Business for WorldRemit, a digital international money transfer service, stated that “we love our women customers” because women tend to send smaller-sized remittances more frequently while men tend to send larger amounts less frequently. As revenue is driven more by frequency than amount, WorldRemit rewards its customers accordingly. Like Tyme, WorldRemit deepens their customer data analytics with market research and found, for example, that women want to control how the money they send home is used. The company has since designed ways to ensure that remittances are spent on what the sender wishes (e.g. groceries and medicine), rather than the recipient receiving cash.

Priti Gupta, CEO of India-based mass market wealthtech LXME, told the group, “time and practice have shown that women have much stronger financial discipline than men.” LXME’s data underscores the impact of women customers’ financial discipline on the bottom line. “Not only are their NPLs lower, but their average assets under management (AUM) are larger than that for men”. And with the caveat that it is still early days for LXME, Priti shared that their CAC:LTV ratio is currently 1:13 ratio sharing that “once women decide to invest their money there’s no turning back!”

Sucharita Mukherjee, Co-Founder and CEO of Indian financial services platform Kaleidofin, concurred that women are super disciplined. Currently serving one million unbanked women, the company has a deep understanding of customer life goals and challenges and has designed a product bundle to match. The bundle is presented in a simple manner on an App with integrated voice and video, available in nine local languages. Like Tyme, Kaleidofin offers the combination of technology and touch, with agents supporting on-boarding and use by women.

There is only one way to drive value: look closely at women’s user behavior, focus on often-overlooked indicators like the CAC:LTV ratio, and, of course, sex-disaggregate your data.

We encourage anyone who missed this stellar panel to watch the recording on our #FintechFridays YouTube channel. And book your spot for our next #FintechFriday on July 9th, on Taking a Gender Intelligent Approach.

Highlights from #FintechFridays on Sex-Disaggregated Data

In the Race to Recruit Female Talent, What Actually Works?