Growing Female Entrepreneurship: A ‘Team Sport’ We Should All Be Playing 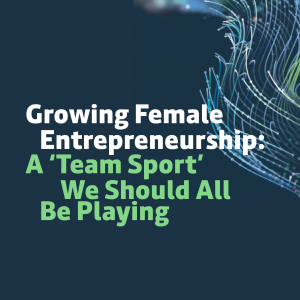 Key Learnings From the Summit

In the first panel at the 2022 Annual Summit in London, Emily Sinnott, Head of the Policy and Strategy Division at the European Investment Bank (EIB), shared that just 11 percent of firms in the European Union are female-founded, compared to 20 percent in the UK and 23 percent in the US. The situation varies widely within the EU 27, and just like in the rest of the world, barriers on both the demand and supply sides are at play.

On the demand side, the UK’s annual Investing in Women Code progress report found that the average angel investment sought by all-female teams was less than half that sought by men. This disparity results from challenges like self-reported lower financial and business education and less connection to Angel networks.

In terms of debt financing, the report found no significant difference in the level of approvals between businesses led by women and those led by men. However, the average loan approved for women-led companies was less than half the amount authorized for male-led firms, likely due partly to sectoral and size differences, as well as women asking for less—which reflects limiting factors like home care responsibilities and anticipated bias.

In terms of venture capital, Anna Wnuc, co-founder of European Women In VC, shared their latest data that showed that less than 1 percent of VC funding in Europe went to female-founded firms in 2021.

Speakers who addressed this topic at the Summit agreed that addressing these barriers will take two fundamental changes: 1) Sharing data to create awareness and urgency, encouraging accountability, and spreading the know-how. And 2) Increasing the diversity of decision-makers across the funding sources, particularly in angel and venture capital.

These levers will require collaboration across the financial ecosystem, which stakeholders can achieve through initiatives like the UK’s Investing In Women Code. This initiative commits FSPs (banks, angels and VCs) to report on financing volumes to women-owned/led businesses, to appoint a senior champion to drive company support, and to share best practices in delivery. So far, 160 FSPs in the UK have signed up for the Code. They’re tracking progress and stimulating national conversations around a set of prioritized action areas.

Supporting High-Growth Women-Led Ventures
While most SMEs are suited to debt financing, high-growth companies must start with equity in the form of angel investing before they can apply for venture capital. That means supporting women in this space to cultivate angel investment.

We know that women angels are more apt to invest in women founders, so it is imperative to increase the number of women in angel investing. As Jenny Tooth, CEO of UK Business Angels trade association, told us, “Once you have women influencing who gets money, you get more women through. Women angel investors put 30 and 50 percent of their investment towards female founders.”

While getting more women into decision-making roles in VC is also critical, the barriers to getting into the field are significant, mainly because one is expected to bring one’s own money to the fund. It also involves persuading LPs, as institutional investors (including governments) often have conservative, risk-averse mindsets. While this is a multi-layered issue, there are pathways forward. The challenge is to magnify action and identify key levers to act on, as many of the speakers we heard from at the Summit are doing.

Amy Neale, General Partner at Delta Ventures, shared that the industry is beginning to change. Companies now want “operator investors” with strong sector expertise, opening the door for more women. Banks can help on this front by creating awareness among high-net-worth (HNW) women and building their capacity to invest as angels.

To get more venture capital to female founders, speaker Shelly Porges founded the campaign Beyond the Billion which garners funding commitments from GPs and LPs, raises awareness of the gender gap, and challenges other VCs to make pledges.

Supporting Women-Owned/Led Small-to-Medium-Sized Enterprises (WMSEs)
The core of Alliance members are banks, and several shared their latest innovations to increase debt finance to women-owned/led SMEs. BNP Paribas in France has, among many things, earmarked funds to finance WSMEs to the tune of €2B and set a target to increase equity financing to female founders from 10 percent to 25 percent by 2025.

KCB Bank in Kenya has changed to a cash-flow-based underwriting methodology, which has increased the percentage of WSMEs getting finance from 9 percent to 23 percent. The bank’s approach has also led to a remarkable increase in its Net Promoter Score, from 2 percent to 60 percent.

Head of SME and Agribusiness noted noted, “with NPLs below 3 percent for women versus over 6 percent for men, it is not about women being risk averse, but risk aware.”

Rachael McKenzie from Westpac, which provides a one-stop-shop for women business owners to learn and network on its Ruby Connection platform, spoke about its strategy for supporting childcare businesses—often women-owned—with dedicated relationship managers. This is an essential piece of the puzzle, given that childcare responsibility is a major barrier to women starting and scaling businesses.

While Westpac has a range of solutions to support women-owned businesses, enabling Relationship Managers to work with women customers is the hallmark of the longevity of their two-decades-old women-centered strategy.

Banks require strong WSME data in order to create and iterate on products and services for women-owned businesses. BRAC Bank in Bangladesh used sex-disaggregated data to build a holistic proposition that has increased the number of WSME it serves from 3,000 to 33,000.

“When you design the program and have the sex-disaggregated data, it helps you track probability and gain internal support,” Mehruba Reza told us.

Others are calling for better market data on WSMEs to advance their initiatives. “We are lacking data on WSMEs that would allow banks like HBL to design funding for WSMEs,” said Shazia Gul.

The Bottom Line
These insights remind us why the Alliance network is so important: By building the business case and sharing know-how, we are charting the path to close the gap for female entrepreneurs in ways that drive sustainability for our communities, economies, and planet. Our members are already leaders in this space.

We can take that leadership to the next level by rallying national ecosystems to support women-owned and -led businesses in their markets, as NatWest has done in the UK. As Wendy Teleki of the Women Entrepreneurs Financing Initiative (WE-FI) pointed out, developing Investing in Women Codes in each of our countries of operation is a crucial lever to drive action from providers and policymakers.

And as NatWest CEO Alison Rose said of supporting women entrepreneurs: “This is a team sport.” With $160 trillion in unlocked potential and the planet’s future at stake, we can all win by sharing much-needed data and increasing our know-how.

CEOs on the Risks of NOT Taking Climate Action

Our Network of Female Economy-Focused Fintechs is Growing