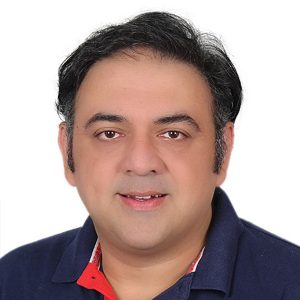 An alumnus of IE Business School, Madrid, Vaibhav Kathju comes from a rich experience in BFSI of 18 years, and has been recognized as one of the 100 Top Most Influential BFSI Leaders by the World BFSI Congress recently. He has made his mark in companies like Deutsche Bank, DBS, TransUnion Cibil and HDFC. He has predominantly worked with the new age banking platforms and emerging alliances in the digital space for India.

He has initiated and grown many niche programs in his tenures, the impact and thought processes of which is truly influential. Through his career, he has been involved with either establishing new verticals in large organizations or has been a part of start-up for Multi-National Companies.

Heading the India Insurance vertical in TransUnion Cibil, he put the Indian insurance business on the map of the top 4 international markets within the first 18 months. He gained immense knowledge and became an industry thought leader in the use of data for the insurance market in India.

In his last role, he was Head Emerging Alliances at HDFC Life and was
spear-heading the emerging ecosystem business which contributes to more than 20% of the lives covered on an annual basis by HDFC Life.

He is currently Co-creating a Neo-Bank for Women by the name of Mahila Money.