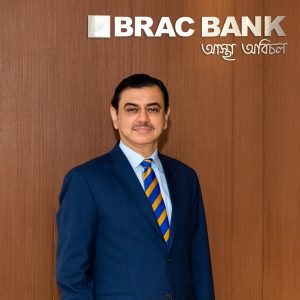 Selim R. F. Hussain joined BRAC Bank Limited as the Managing Director and CEO on November 8, 2015. Hussain is a career banker and an immediate past CEO and Managing Director of IDLC Finance Limited who is widely recognized and highly acclaimed across the financial sector for being the architect of IDLC Finance’s meteoric rise over the last six years. He was also the Chairman of the Board of Directors from 2010 to 2012 of IDLC Finance’s two subsidiaries – IDLC Investments Limited and IDLC Securities Limited. Hussain has an Honors degree in Accounting from Dhaka University and an MBA (major in Finance) from the Institute of Business Administration, Dhaka University. Hussain worked in various roles with the two largest multi-national banks in Bangladesh – ANZ Grindlays Bank and Standard Chartered Bank, for twenty-four years, before moving to the IDLC Group in 2010. He has resided and worked in India and Australia for significant periods of his career and, before taking over the helm at IDLC Finance Limited, was the Head of Finance and Strategy for Standard Chartered Bank’s Consumer Banking Division in Mumbai, India. Hussain was also the CFO for Standard Chartered Bank, Bangladesh, from 2002 to 2007. He was also a Director at the Credit Rating Agency of Bangladesh (CRAB) and the Vice Chairman of the Bangladesh Leasing and Finance Co Association (BLFCA) since 2012. Hussain is married with one son and apart from enjoying reading and traveling, he is a keen cricket and football enthusiast.

Founded in 2001 with a small and medium enterprise focus, BRAC Bank is always looking to innovate and improve its business model in line with its commitment to profitable, customer-centric and socially responsible growth. Today the bank offers a full array of banking services to both individuals and business entities across Bangladesh. BRAC Bank serves more than 1.1 million clients, with a network of 187 branches, 465 ATMs & CDMs, 456 SME Unit Offices and 362 Agent Banking Outlets.