Chairman of the Board of Directors, AXA 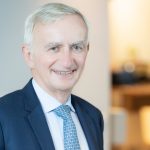 Denis Duverne is a graduate of the École des hautes études commerciales. After graduating from the École nationale d’administration (ENA), he started his career in 1979 at the Tax Department of the French Ministry of Finance, and after 2 years as commercial counsellor for the French Consulate General in New York, he became director of the Corporate Taxes Department and then responsible for tax policy within the French Ministry of Finance from 1986 to 1991. In 1991, he was appointed Corporate Secretary of Compagnie Financière IBI. In 1992, he became a member of the Executive Committee of Banque Colbert, in charge of operations. In 1995, Denis Duverne joined the AXA Group and assumed responsibility for supervision of AXA’s operations in the US, the UK and managed the reorganization of AXA companies in Belgium and the UK. From February 2003 until December 2009, Mr. Duverne was the Management Board member in charge of Finance, Control and Strategy. From April 2010 to August 2016, Denis Duverne was director and Deputy CEO of AXA, in charge of Finance, Strategy and Operations. Since September 2016, Denis Duverne has been non-executive Chairman of the Board of Directors of AXA. Since September 2018, he has been Chairman of the Insurance Development Forum. The IDF is a public-private partnership led by the insurance industry and supported by the World Bank and the United Nations, aiming to enhance the use of insurance to build greater resilience against disasters and to help achieve the United Nations Global 2030 Agenda.