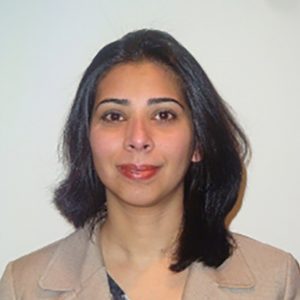 Anushe leads advisory services for the Global SME Finance Facility, a joint investment and advisory platform focusing on SMEs including women owned SMEs, across several regions such as Sub Saharan Africa, Middle East and North Africa and South Asia. In her role, she oversees a portfolio of projects globally and continues to position IFC as a thought leader in this space. She further manages advisory services for several global investment and advisory services facilities such as the Women Entrepreneurs Opportunity Facility (WEOF), supported by IFC and the Goldman Sachs Foundation. She is based out of the Washington, D.C. office. She joined the IFC South Asia team in 2002, where she played a key role in setting up the access to finance program for South Asia focusing on SME Banking across four countries, where she implemented advisory services projects on SME banking with a number of key clients. In 2006, she moved to Washington D.C. to join the Financial Institutions Group, where she led a number of global advisory services programs in SME banking and Access to Financial Services. Prior to joining IFC, Anushe held several positions in commercial banking in the areas of credit, loans and guarantees. Anushe holds a Master’s degree in International Relations from Georgetown University and a Bachelor’s degree in Business Administration from the Institute of Business Administration in Dhaka.

IFC—a sister organization of the World Bank and member of the World Bank Group—is the largest global development institution focused on the private sector in developing countries. The Bank Group has set two goals for the world to achieve by 2030: end extreme poverty and promote shared prosperity in every country. Over the last ten years, IFC has worked to address the market failure in the women’s segment, through developing the business case around access to finance for women entrepreneurs and investing through intermediaries in this segment.