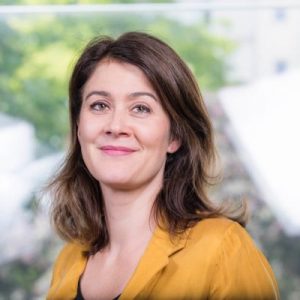 Ulrike Decoene was appointed AXA Group Head of Communication, Brand and Corporate Responsibility in March 2019, while continuing to lead the Women in Insurance Initiative for the AXA Group.

Previously, she held the role of Chief of Staff to the CEO of AXA.

She joined AXA Investment Managers in 2007, where she led Global Media relations and Internal communications.

Between 2010 and 2015, Ulrike ran Corporate Communications, Corporate Responsibility and Public Affairs for AXA’s Mediterranean, Middle East and Latin American operations, notably focusing on theintegration of new businesses in Africa and Latin America. Prior to her current role, she was appointed Head of the AXA Research Fund, AXA’s global philanthropy initiative in support of fundamental risk research.

Before joining AXA, Ulrike spent 5 years working for different offices of the French government, in particular as an advisor for the Prime Minister Dominique de Villepin between 2005 and 2007.

Ulrike is a graduate of the Ecole Normale Supérieure and Université de la Sorbonne, with teaching experience in the Universities of Paris-Est and Yale.