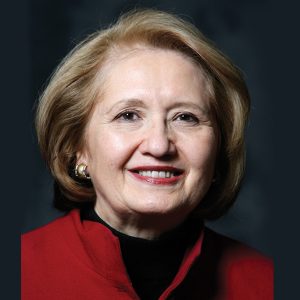 Ambassador Melanne Verveer serves as the Co-Founder and Chair of Seneca Women and Executive Director of Georgetown University’s Institute for Women, Peace and Security. In 2009 President Obama appointed Verveer to be the first ever Ambassador-at-Large for Global Women’s Issues at the US State Department. Ambassador Verveer worked on behalf of Former Secretary of State Hillary Clinton to coordinate foreign policy issues and activities relating to the political, economic and social advancement of women and girls. Prior to her role at the U.S. State Department, Ambassador Verveer served as Chair and Co-CEO of Vital Voices Global Partnership, an international nonprofit she co-founded. Vital Voices invests in emerging women leaders and works to expand women’s roles in generating economic opportunity, promoting political participation, and safeguarding human rights. Prior to her work with Vital Voices, Ambassador Verveer served as Assistant to the President and Chief of Staff to the First Lady in the Clinton Administration. Ambassador Verveer has a B.A. and M.A. from Georgetown University. She is a member of the Council on Foreign Relations and has served as the 2013 Humanitas Visiting Professor at Cambridge University. She is the recipient of numerous awards, including the U.S. Secretary of State’s Award for Distinguished Service. In fall 2015, Ambassador Verveer and Kim Azzarelli published Fast Forward: How Women Can Achieve Power and Purpose. Fast Forward chronicles how women are harnessing their growing economic power and leadership to invest in women and girls in order to yield extraordinary dividends for people, organizations, and countries.