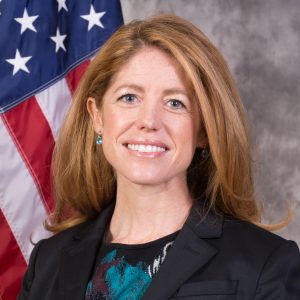 The United States’ development finance institution, the Overseas Private Investment Corporation (OPIC), has been in the news in the past year for its 2X Women’s Initiative, which even before its 1-year anniversary had mobilized US$1 billion to invest in women in the developing world. OPIC is now turning its focus to two regions where investment in women’s economic opportunities is significantly lagging: Latin America and the Caribbean and Africa. Kathryn C. Kaufman, Managing Director for Global Women’s Initiatives at OPIC, talked to the Financial Alliance for Women about why we need to create more economic opportunities for women and where the 2X Women’s Initiative is headed.

Financial Alliance for Women: Your work focuses on getting women in the developing world access to leadership opportunities, quality employment, finance, enterprise support and products and services that enhance economic participation and access. In your view, why is it so important to focus on creating economic opportunities for women, particularly when it comes to financial services?

Kathryn Kaufman: OPIC’s mission is to spur economic prosperity and foster global stability. We believe women are a key driver for both and have thus made empowering women a core part of our business. There are well-known statistics that support our strategy of empowering women to drive growth and stability. With respect to economic growth, McKinsey estimates that women would add US$28 trillion to global GDP if they participated equally in the economy. With respect to stability, we know that when women earn a competitive income, they reinvest 90 percent back into their families. By comparison, men reinvest closer to 30 percent.  The goal of 2X is to use systems of finance to create gender equitable change and more prosperous and stable economies.

Alliance: The 2X Women’s Initiative celebrated its 1-year anniversary in March of this year, and you managed to surpass your goal of mobilizing US$1 billion to invest in women in developing countries even before that milestone. Can you give us an update on how that money has been invested so far?

KK: The 2X US$1 billion commitment is the single largest financing commitment the US government has ever made toward global women’s economic empowerment.  It is an ambitious target and we were honestly very nervous about being able to reach it.

We engaged in a design thinking process to change the culture of the agency so that throughout the arc of a transaction our investment officers have the ability to identify and address areas of risk and opportunity related to gender.  And as an agency, we would prioritize projects that meet 2X Criteria. Since then, we’ve deployed more than US$1.5 billion against the 2X Criteria. An overview of 2X can be found at http://opic-2x.sage-dev.net.

Alliance: With the 2X Challenge, OPIC together with other G7 countries, you are now aiming to mobilize US$3 billion for women. How is that initiative progressing?

KK: We accepted the 2X Challenge with our sister G7 DFIs because we wanted to mobilize more capital and create a unified vision in the market for what it means to invest in women. The criteria we ultimately agreed on can be found on the 2X Challenge website (https://www.2xchallenge.org/criteria), along with the evidence that supports our conclusions.

I’m very excited that the 2X Challenge is now gaining traction among countries outside the G7. We just had four Nordic countries join, and we hope that every country with a development finance institution will join us.

Alliance: Recognizing that the gender credit gap is largest in Latin America and the Caribbean, you have also made some strong commitments to that region. Why is the LAC region a strategic priority for OPIC?

KK: I think the fact that Latin America is the region with the largest credit gap is somewhat surprising to us in the US.  These are our neighbors, so right out of the gate we wanted to see what we could do to bridge the credit gap – and influence our private sector partners to help as well. We launched 2X Americas, a US$500 million commitment to women in the region only a few months after announcing 2X.  We have met this commitment through transactions like our $150 million in financing to Banco Pichincha in Ecuador, of which at least 30 percent will be designated for women entrepreneurs.

Because we were initially focused on the credit gap, that’s where we deployed a lot of capital to partner banks. In the region, 30 percent of SMEs are owned by women, so what we’ve been trying to do with all these banks is ensure that at least 30 percent of the capital is going to female borrowers. If a bank doesn’t have that reflected in their portfolio, they’re missing an opportunity.

We’ve also been encouraging our partners to join the Financial Alliance for Women to grow their knowledge and get the skills and training they need to grow their business with female borrowers.

Alliance: Last year you launched Fund Mujer in collaboration with the Inter-American Development Bank’s IDB Invest, which is the first gender-focused fund for the LAC region – supporting investment strategies focused on women-owned businesses, female entrepreneurs, and firms that generate jobs or consumer products for women to the tune of up to US$200 million. Can you give us an update on that work?

KK: We know that women receive about 2 percent of global venture capital, and we know that diverse fund managers will invest more in female-owned/-led enterprises. As OPIC internally onboarded this gender lens we wanted to reward fund managers that brought a similar lens to their investment strategy.

The IDB, which obviously knows the LAC region really well and also brings a lot of gender expertise in that area partnered with OPIC’s robust funds department to bring our collective support to this effort. We were excited about this innovative partnership, but after we launched Fund Mujer, we received zero applications.

We really believed in the power of including gender in an investment strategy, so instead of giving up, we embarked upon a non-traditional activity for OPIC and with IDB, launched a Latin American roadshow to promote the initiative. We did breakfasts with fund managers where we clarified what we meant by gender lens investing – that it doesn’t mean you can only invest in women-owned businesses or you have to be a female fund manager, only that you need to value women as entrepreneurs, employees, and consumers.  This value should be reflected by a portion of your portfolio meeting the 2X Criteria.

The roadshow proved effective, and we received quality applications. We are now in the process of doing due diligence on over US$700 million worth of investments in fund managers that apply a gender lens. We’re really excited about that and really confident we will at least meet our initial US$200 million goal.

Alliance: How did the new US$1 billion 2X Africa initiative come about?

KK: A year into the 2X Challenge we had visibility on where the money was flowing, and it was actually quite astonishing how little was going to Africa. There was US$400 million to Latin America, US$300 million to Indo-Pacific, and Africa, which has the most female entrepreneurs in the world, had only US$40 million. We wanted to be intentional about where we could have the most impact and so we decided this year to focus on Africa.

Alliance: How are you measuring performance?

KK: The 2X Challenge harmonized criteria provides a path towards harmonizing how we are collecting data and using data, and hopefully in the future, provide a way to benchmark our progress.

At OPIC we weren’t collecting sophisticated sex-disaggregated data in many instances. We had to change our application form and self-monitoring questionnaire, which is how we measure our impact. Those forms are now enabling us to track how many jobs are being created for women, how many are quality jobs, how many investee enterprises have female ownership, and a lot of other important data and details we need on women.

Alliance: What’s next for the 2X initiative?

KK: My hope is that the 2X Criteria will be accepted by all DFIs, MDBs, and eventually private institutional investors. This will give us a common language, avoid “pinkwashing,” and provide a way to report so that we can learn from our efforts.

For OPIC and the U.S. International Development Finance Corporation (DFC), the 2X Office will continue to play a critical role in what will be a US$60 billion* force for good in the world.

* The DFC has a US$60 billion investment cap.