Every month, the Financial Alliance for Women publishes a roundup of the latest updates from network partners and members. While it’s no longer business as usual, earlier this month some of our members were still able to proceed with their activities and International Women’s Day (IWD) celebrations. Take a look at what’s new below:

Following the launch of The Big Push, Futurpreneur Side Hustle Program and The Brand is Female Podcast series, TD Bank expanded its value proposition to women entrepreneurs with a series of new initiatives: 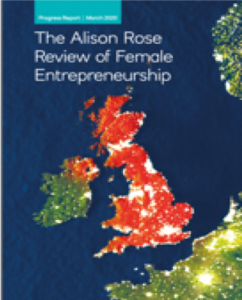 Ahead of International Women’s Day, NatWest published an update to last year’s “Alison Rose Review of Female Entrepreneurship,” which revealed boosting women’s entrepreneurship could add GBP 250 billion (US$290 billion) to the UK economy. The March 2020 Progress Report finds that the initial report spurred progress for women in business across the UK. Since its March 2019 publication, the Investing in Women Code – a commitment by financial services firms to improving female entrepreneurs’ access to tools, resources and finance – has been adopted by 22 financial institutions in the UK; NatWest itself has announced GBP 1 billion (US$1.2 billion) in ring-fenced debt funding for women-led businesses; and Local Enterprise Partnerships have been established across the country, with all 38 now having access to banking Experts in Residence who offer advice and support to women entrepreneurs.

“The Rose Review into female entrepreneurship was born out of a sense of frustration at the unacceptable disparity which exists between female and male entrepreneurs and the slow progress in closing this gap,” Alison Rose, CEO of NatWest, said. “Our hope was always that the Review would galvanize real action – we did not want it to sit on a shelf – so we committed to give a progress update. We have been heartened by the commitment to implementing the recommendations of the report since its publication in March 2019, reinforced by this government’s ambition to increase the number of female entrepreneurs by half by 2030.”

Bank al Etihad hosted a MoneySmart “Women Bootcamp” in December to help women manage their personal finances. The event was a success, with a reported 50 percent increase in financial literacy from attendees, generation of new business for the bank as well as the collection of valuable information on the pain points women business owners have – which in turn will help the bank develop new products and services. 100 women attended the boot camp, 80 percent of whom were existing clients. 50 percent of non-clients opened new accounts and 15 percent of women requested new loan facilities following the training.

The bootcamp was designed for women over the age of 25 to empower them with financial planning skills and decision-making techniques. It opened with a financial dialogue between attendees and 10 experts. Then, four expert trainers covered six interrelated topics through hands-on activities, group discussions and games.

More recently, the bank held a range of activities to mark IWD. This included an internal gathering for women employees, with a candid speech from the CEO – who is also a woman – engaging features such as a display of the employees’ photos from when they were very young stating their dream for when they grew up, touching testimonial videos from their husbands, as well as a giveaway from women entrepreneurs. This was coupled with an external activation: a series of six videos of pioneering Jordanian women, released on social media, as well as giveaways to VIP women clients.

Mastercard’s Start Path, has helped female founders raise nearly US$1 billion in capital and offers entrepreneurs access to Mastercard’s capabilities and partner network. An example of support given is to a female-founded eCommerce company called Kasha. The firm delivers health and beauty products, and Start Path enabled its customers to pay through digital wallets from any type of mobile phone. No smartphone needed. No internet needed.

This kind of design thinking is a core capability of Mastercard, and the company is working with card issuers to ensure that the unique priorities of women are addressed.

Read full article here: Designing for Women, One Product at a Time

Enat Bank supports women to run and save

The race aims to empower, promote and celebrate women’s excellence, in conjunction with IWD. The bank leveraged the event to promote their Children Saving and Bilhat Saving account, with T-shirts stating “RUN Longer, SAVE Smarter.”

In addition, senior management held an IWD-themed morning tea, discussing the bank’s vital role in creating economic and financial awareness of women in general and as customers of the bank.

TARA, the women’s banking solution from BRAC Bank, launched a number of activities to celebrate IWD, including:

The bank’s focus for IWD was on discrimination based on abilities and skills, both occupational and professional. During an exhibition game brought by Major League Baseball (MLB) to the Dominican Republic, a female amateur baseball player was invited to make the first pitch.

Check out the event and resulting video released by the bank to celebrate IWD and women.

Westpac’s Women in Business division championed gender diversity with the release of a series of stories for IWD through Westpac Wire, an external publication. These included inspiring stories of emerging female leaders in the automotive industry, on why women are increasingly influencing wealth and how this is set to impact the global economy, as well as how Westpac is giving back to the female economy by teaching at our very own All-Stars Academy earlier this year in Ecuador.

Given the current circumstances, the bank is doubling its efforts around customer financial education, launching a series of webinars through the Davidson Institute to support people virtually. Check out the webinars here.

City Bank in Bangladesh celebrated City Alo’s 1st anniversary and IWD with a comprehensive set of offerings tailored to women, including:

Stanbic Bank CEO Leina Gabaraane noted that there was little achieved in gender equality since the Beijing declaration, stating, “there still exist many countries and institutions in the world that do not support gender equality. To this day, we still find ourselves having certain roles reserved for certain genders and not others. As people in positions of leadership, we must ask ourselves what we have done to promote true equality of the sexes.”

The bank celebrated IWD by engaging leaders and members of the G&T Continental team to take part in a video where they highlighted internal initiatives that promote equity and inclusion, such as:

The campaign was broadcasted internally through email, institutional social media and WhatsApp Groups using the hashtag #OrgulloGTC, which represents the pride of being part of G&T Continental.

The campaign was also shared externally on the bank’s social media accounts (Facebook, Instagram, Twitter and LinkedIn) transmitting a powerful message of the bank’s inclusive culture.

The Alliance for Financial Inclusion (AFI) celebrated IWD by rolling out a social media campaign in support of the UN Women theme, Generation Equality. The campaign featured blogs from Executive Director Dr Alfred Hannig, the Central Bank of Egypt, the Central Bank of Nigeria, Data2X and a spotlight on how financial regulators are supporting women-owned SMEs, as well as an earlier interview with the Deputy Governor of the National Bank of Rwanda. The campaign also showcased AFI publications and attracted the participation of central bankers through empowering quotes and dynamic photos.

In collaboration with WWB and Oxford University’s Said Business School (SBS), AFI embarked on the second cohort of its Leadership and Diversity Program for Regulators, aimed at supporting financial regulators in developing policies that address the financial inclusion gender gap and create more gender-diverse teams and leaders within financial institutions. The program includes virtual learning and a weeklong intensive study conducted at the SBS campus.

Earlier in the year, a bilateral meeting was held between IMF Managing Director Kristalina Georgieva and AFI Executive Director Dr. Alfred Hannig. At the top of the meeting agenda were inclusive FinTech, gender and green finance. Both organizations agreed that it was important to collaborate on data collection and analysis for inclusive gender and green finance. This is an important outcome for the Women’s Financial Inclusion Data partnership, of which Data2X, AFI, the IMF, IFC, IDB, the World Bank and the Financial Alliance for Women are members.

In an effort to flatten the curve of the COVID-19 outbreak while keeping AFI work going, thematic Working Groups are convening in a virtual form, with policymakers from across the globe. We are currently in development of knowledge products on topics such as Gender Savings Groups, Risk Sharing Mechanisms, Credit Guarantees for Financing for Women and a Situation Report on Women’s Financial Inclusion using Digital Financial Services.