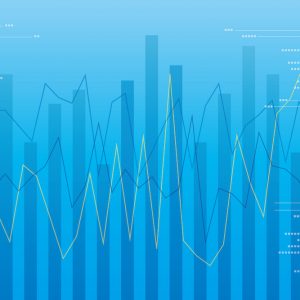 Sean Higgins is an Assistant Professor of Finance at the Kellogg School of Management at Northwestern University and a Post-Doctoral Fellow at the National Bureau of Economic Research. His research focuses on how technology can reduce access barriers in financial markets and support the financial inclusion of households and small firms. Most recently, he and his co-authors Joshua Blumenstock (UC Berkeley), Laura Chioda (World Bank) and Paul Gertler (UC Berkeley) have been researching gender-differentiated credit algorithms with support from the Digital Credit Observatory (Center for Effective Global Action and Bill & Melinda Gates Foundation), Data2X, USAID and the World Bank, and in collaboration with Innovations for Poverty Action. The Alliance spoke to Sean about this research and the significant impact the model potentially could have on women’s ability to access credit.

Financial Alliance for Women: What was the impetus behind your research on gender-differentiated credit scoring?

Sean Higgins: There is data that shows that women overall have lower access to credit. But we’ve also seen growing evidence that – even when they have the same characteristics as men in terms of income, etc. – the credit markets are showing biases against women. There are a number of studies that show that they are less likely to be approved for a loan, and when they are approved they receive lower loan amounts, or they end up getting higher interest rates. When the opportunity arose to create credit scores for previously unbanked women and test whether we could reduce the gender bias in access to credit, we were very interested to do so.

Alliance: Can you talk a little bit more about the biases you’ve seen in the provision of credit to women?

I like to use this analogy: If you’re trying to predict mortality rates, but you’re supposed to ignore gender because you don’t want to discriminate, you’re going to miss all the gender-specific differences. For example, around age 20 there’s a spike in mortality for men that’s much larger than it is for women. If you’re ignoring gender, you would miss that, and the mortality rate you predict for 20-year-olds would be an average between men’s and women’s that would over-predict the mortality of women at that age and under-predict the mortality of men.

Now suppose you’re able to use gender, but you’re not able to interact it with any of your other variables. What happens then is whatever the average difference in mortality is between men and women across all ages will be applied uniformly to each age group. So suppose overall mortality is 2 percentage points lower for women across the entire age range we have data for. No matter what specific age you’re looking at, the predicted mortality rate will be 2 percentage points lower for women than for men. It’s only once you fully interact gender with the other variables (in this case age) that you get more accurate predictions.

It’s a similar thing with credit scoring: You need to be able to take into account not only gender, but the ways that gender interacts with the other variables in your model to better predict creditworthiness.

Another pitfall of not looking at gender is that you aren’t able to build safety checks into your model to ensure women aren’t being discriminated against, like what we saw with the Apple Card scandal. Ultimately, it’s important both to include these variables and also to include robust safety checks in any machine learning credit scoring model.

Alliance: What were the key objectives of the research? 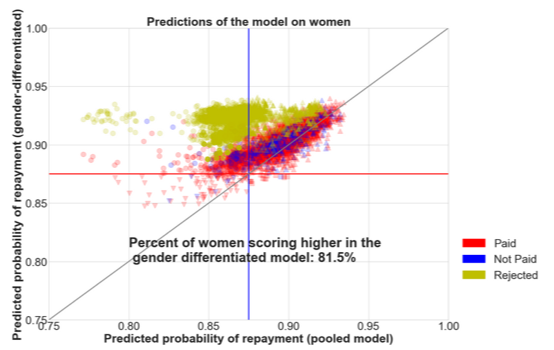 SH: Our first objective was to see whether incorporating gender across multiple levels of a machine learning model could increase women’s access to credit. Although in a lot of countries it’s illegal to use gender when making credit decisions, in the Dominican Republic it’s not.

We worked with Asociación La Nacional de Ahorros y Préstamos (ALNAP) as they were interested in increasing gender equity in lending, particularly to low-income women. The bank was already using gender as a variable in its credit scoring model, but they were not using machine learning to include a complex set of interactions between gender and other variables in the model.  ALNAP had already created a score based on sociodemographic characteristics to offer loans to low-income women with no credit history, and we are now using that repayment history to build a credit scoring model that introduces a new innovation to fully account for the ways gender interacts with other characteristics in the model.

With a gender-differentiated credit scoring model, we’re finding that about 80 percent of women are getting higher credit scores than in an equally sophisticated machine learning model that includes gender as a variable but isn’t estimated separately for women and men. That result is still preliminary as we’re in the process of incorporating better data into the model, including mobile phone data (only for clients who consent to us merging their repayment data with mobile phone data to build the credit scoring model).  The mobile phone data includes anonymized data about when calls are made and when phone balances are topped up, for example, which reveals information about communication patterns, social networks and financial behavior.

Alliance: What can a financial institution learn from the research to apply to their own credit scoring or lending models?

SH: Recent research in algorithmic fairness shows that by including these variables alongside fairness criteria, you can reduce bias against women in credit markets. There is often a trade-off between equity and efficiency in these credit scoring models, but that can be precisely measured, and the new innovations we’re testing like gender-differentiated credit scoring may reduce gender gaps with little impact on the overall precision of the model.

Alliance: Do you think these findings would extend to other countries and regions?

SH: The fact that we see that women repay at higher rates in our data is something that has been documented around the world, so the potential is there. As is the logic behind why it works: We went into the study expecting to find certain things because it’s based on intuition about how these models work. That intuition also applies elsewhere, and my sense is that the model should also reduce gender bias elsewhere and render higher credit scores for most women, as long as women repay loans at higher rates in those contexts as well.

Alliance: Can you tell us about the next phase of the research? What ideally would you like to achieve?

SH: This is only the first stage, and this is a two-stage project. The first stage is building the credit scoring model, which is what we’ve been talking about so far. We’re still working on incorporating better data into the model for this first stage of the project.

The second stage is we want to quantify the impact of credit for women who would be eligible for credit under the new gender-differentiated model but who would not have been eligible under the old model. To quantify the impact, we would randomly assign which credit score is used to determine whether they receive credit. We’ll then look at outcomes in terms of consumption smoothing, investment in microenterprises, ability to cope with shocks and various other things that credit could affect, comparing between the women who got credit and those who didn’t in order to test the credit’s impact on this specific population of women who are newly eligible for credit using our gender-differentiated model.

Alliance: What has been the most challenging part in conducting the research?

SH: All the data are obviously highly sensitive, and so there are a lot of regulations around data privacy. One area that required a lot of careful work was setting up an infrastructure to ensure the data are safe, putting an anonymization algorithm in place, making sure everything is end-to-end encrypted and in compliance with all the regulations from the Dominican Republic’s Regulator of Telecommunications.

Alliance: As you already mentioned, in many countries laws prohibit financial institutions from using gender in lending decisions as it’s considered discriminatory, but that can have unintended consequences. Is there something governments of these countries can do to help financial services providers use innovations like this gender-differentiated credit scoring model in a productive way?

SH: In some cases, we’re kind of stuck with regulations that were implemented at the beginning with good intent but have led to negative effects. In recent years we’ve seen increasing evidence that not using that information does not necessarily remove biases. It would be useful for regulators to think about changing those regulations, but always conditional on building in safety checks to ensure these models aren’t being used to exacerbate biases against any groups.

Alliance: If you received a grant for $5 million tomorrow to conduct any piece of research of your choice, what would it be? Why?

SH: One area that we need more research in is consumer financial protection – especially as we see big data and AI used more and more. One specific example I would use grant money for, if I had it tomorrow, would be on providing consumers with information that enables them to better navigate credit markets and get better loans than they would have otherwise. There’s research that shows that consumers looking for a loan often tend to get just one quote from one bank, and if they get approved, they take the loan. There’s also a lot of evidence that if they had gone to five different banks, they would have gotten five different quotes – and there may have been a lot of difference in interest rates between those quotes. So there’s potentially a lot of benefit to consumers shopping around.

I’m already working with one country’s financial regulator to build an interactive data visualization tool using data on all loans given out by banks in the last 6 months. Consumers can go into the tool, input their income, neighborhood they live in and characteristics of the loan they’re looking for, and see what interest rate other similar consumers have gotten for similar loans in the past 6 months. This could also be done by crowd sourcing information from the consumers themselves as they receive quotes from banks. And you can also imagine a future in which a consumer could enter their information into an app, and banks could bid on that consumer in real time with what interest rate they would offer them. Any financial services providers or regulators interested in implementing that type of technology, please contact me!