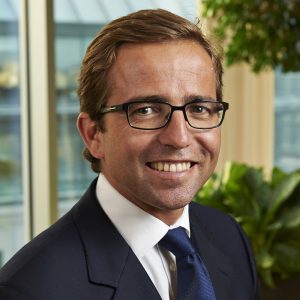 Marcelino Castrillo was appointed as Managing Director of Business Banking at NatWest and Royal Bank of Scotland in September 2015, reporting to Les Matheson, CEO of Personal & Business Banking. In July 2016, Marcelino’s role expanded to include Private Banking, which was recently relaunched to the market on 30th October 2017 as Premier.

Prior to joining the UK’s biggest lender to UK SMEs, Marcelino was Managing Director of SME Banking at Santander, where he was responsible for leading the challenge of scaling Santander’s business bank and managed the business through a period of significant change. During his career there, he also held other senior roles at the Spanish bank. Marcelino’s early career was spent at The Boston Consulting Group, where he worked across different countries and industries.

His ambition is to help Royal Bank of Scotland become the best bank for customer service, trust and advocacy by 2020. He believes that to do that a great business bank must do three things really well: be close to its customers, be easy to do business with, and be more than simply a provider of financial services.

Marcelino has an MBA from Massachusetts Institute of Technology, Sloan School of Management. He also has a Masters in Industrial Engineering and is a Bachelor of Physics.