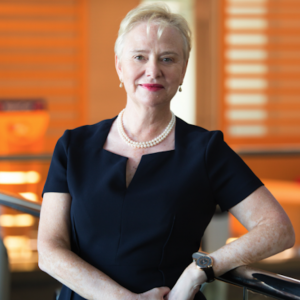 In her role as Vice Chairman Ann represents Mastercard around the world, focusing on inclusion, diversity and innovation.  She plays the important role of senior ambassador and executive leader with a global remit and sits as part of the company’s global management committee.

Prior to her appointment Ann was President of International Markets responsible for the management of all customer-related activities in over 200 countries around the world. In this role she focused on building sustainable, strong growth rates across both mature and emerging markets. She has led the company’s expansion into new and diverse geographies and opened up new customer segments; embracing the continued evolution to digital while driving an increased focus on safety, security and convenience.

Ann is passionate about the role Mastercard can play in delivering financial inclusion through innovation and has continued to build new global partnerships with governments, telecommunication companies and organizations including the World Food Programme.

Ann brings more than 20 years’ experience working in senior management positions across Europe and the U.S., where she ran global retail, commercial and investment banking operations.  Prior to joining Mastercard in August 2011, Ann was head of the Financial Services Group with Alvarez & Marsal in London, where she led the European team managing Lehman Brothers Holdings International through the Chapter 11 process. In addition she helped restructure banks across Europe including Ireland & Iceland.

Ann has also held senior positions within many global organisations including a tenure as CEO, Transaction Banking at ABN-AMRO, and 15 years in senior operational positions at Citigroup.

Ann sits on the group board of the Fortune 500 Company Intercontinental Exchange (ICE) and is chair of ICE Clear Europe.

A Pure Mathematics degree from Sheffield University and a M.Sc. with research into medical statistics from Newcastle University resulted in an early career as an award-winning research engineer, culminating as the Head of Offshore Engineer-Planning for British Gas where Ann was the first woman qualified to go offshore in Britain.