Our last All-Stars Academy was held in Quito, Ecuador, from January 20-24, hosted by Alliance member Banco Pichincha. Detailed tourism information for the city appears below. 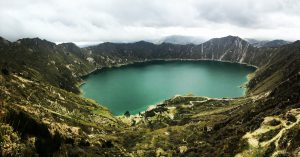 Quito is the capital of Ecuador and the most elevated capital in the world, situated 9,350 feet (2,850 meters) above sea level. It is a city with cultural, architectural and natural diversity: It features the largest and best-preserved historic center in Latin America and sits on the slopes of the Pichincha volcano in the Andes mountains.

Quito is an ancient city and was inhabited long before the Spanish Conquest and the Inca Empire. Quito was one of the first Spanish settlements in South America (1534). Its concentration of churches, chapels, squares, museums and colonial buildings made Quito the first city to be declared a UNESCO World Heritage Site in 1978.

Altitudes in Quito and the surrounding areas vary between 1,640 feet (500 meters), 9,350 feet (2,850 meters) and 13,451 feet (4,100 meters). Visitors who intend to participate in physical activities should consult their doctor, as they may experience illness or discomfort due to the altitude.

Free Wi-Fi access exists in several public squares and parks in the city. In addition, most hotels, hostels and restaurants offer free access.

The city of Quito has many attractions, but the main ones include its Historic Center, the Complejo de la Mitad del Mundo (Middle of the World Complex), the Panecillo, the Basílica del Voto Nacional (National Vow Basilica) and the city’s cable car. 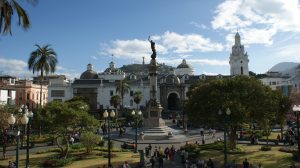 The Historic Center of Quito is the largest and best preserved in all of the Americas. It features colonial and republican architecture, colonial art from the Quiteña School, and a large number of convents and churches richly decorated with carvings and gold leaf. The historic center has internationally recognized first-class restaurants and hotels.

The Complejo de la Mitad del Mundo is one of the most iconic sites in Quito. It is located to the north of the city and features the monument marking the equatorial divide. Here, it is possible to stand on both sides of the planet at the same time. The complex also has themed museums and a variety of vendors offering traditional food as well as handicrafts.

The Pancillo lies at an elevation of 9,843 feet (3,000 meters) above sea level and divides the city in two. The statue known as the Virgin of Quito, Virgin of Legarda or Virgin Apocalyptic stands at its highest point. This monument stands 135 feet tall (41 meters) and is considered the tallest aluminum sculpture in the world. This location offers a fantastic view of Quito, with the city center, as well as its northern and southern areas easily visible. 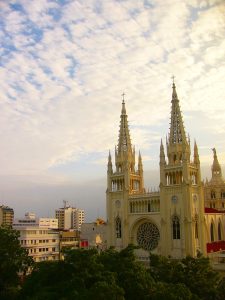 The Basílica del Voto Nacional is considered the largest Neogothic temple in the Americas. Its location and height of 377 feet (115 meters) enable it to be observed from many points in the city. Its construction, inspired by Notre Dame in Paris, began in 1887. Pope John Paul II blessed it in 1985, and it officially opened in 1988.

In the areas surrounding Quito, you can visit places like the Otavalo craft market and its beautiful San Pablo lake; explore the Cotopaxi, considered the highest active snow-capped volcano in the world; schedule a trip by train along the Route of the Volcanoes; tour the tropical forest in Mindo and take in its lush flora and fauna; visit the city of Baños, with its beautiful landscapes and adventure sports; or enjoy the pools of the Papallacta volcanic hot springs.

From Quito you can also coordinate visits to the Amazon, the beautiful beaches of the coast or the Galapagos Islands – all of which have daily flights.